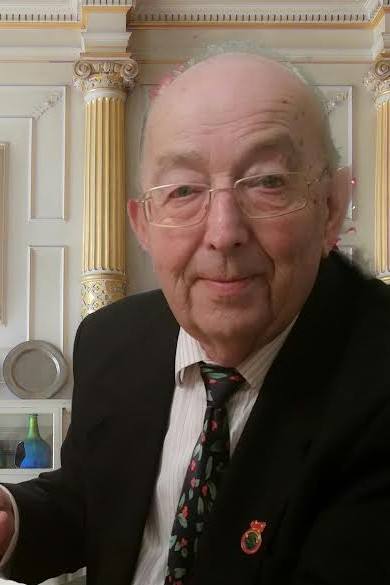 OTTAWA WELSH SOCIETY – Roy and his family moved from Swansea to Ottawa in 1967. Shortly afterwards, they met other Welsh ex-pats and joined the Ottawa Welsh Society. Since then, the family has been very involved in all Society activities. Roy served on the OWS Committee for many years, and served as President in 1999 and 2000. Throughout the years, he has conducted many cymanfaoedd for the Society, often with Alan Thomas on the organ.

OTTAWA WELSH CHORAL SOCIETY – In 1968, Roy was invited to become the conductor of the newly formed Ottawa Welsh Choral Society and he held this voluntary position until 1982. The choir participated in all Welsh Society functions, competed in the Kiwanis Music Festival (which started as an Eisteddfod), and participated in many multi-cultural gatherings with other choirs, which promoted Welsh music and culture.

During those years the choir travelled a lot, often participating in the Ontario Gymanfa Ganu, as they were the only Welsh Choir in Ontario at the time. The choir also visited Wales on two occasions. In 1973 they competed at the Llangollen International Musical Eisteddfod, and in 1978 they undertook a five city concert tour. These tours helped make connections with Welsh artists and choirs in Wales that have proved beneficial over the years.

GWALIA SINGERS – In 1984, a second Welsh choir was started in Ottawa, and Roy was asked to lead them. This group sang together for approximately 10 years and participated in all Welsh Society functions. They also travelled to Pennsylvania where Roy was asked to conduct a gymanfa in Shamokin.
ONTARIO GYMANFA GANU ASSOCIATION – Roy has been a stalwart supporter of the Ontario Welsh Festival over the years, rarely missing a gathering. He served on the committee for a few years, but really found his calling with conducting. He has conducted the Ontario Gymanfa on many occasions, and was often seen leading the AfterGlow singing. He has helped out with arrangements for artists, pianos and organs, and a multitude of other details.

WNGGA/WNAA – Roy has been involved in the National Gymanfa for a number of years. He was on the planning committee for the 1977 Gymanfa in Ottawa, and conducted the OWCS and the RCMP Band in the Grand Concert for that event.

Roy was also on the planning committee for the Ottawa 2000 National Gymanfa and conducted the singing at that event. In 2006, he conducted the National in Cincinnati.

Roy served on the WNGGA Board of Trustees for a few years, then was elected as Vice President in 2004. He assume the position of President in 2006 and served in that post for two years.

OTHER – In addition to the contributions mentioned above, Roy has conducted cymanfaoedd in Shamokin (Pennsylvania), Dewi Sant Church (Toronto) and other locations. He has given his time and talents to every Welsh organization that has asked, and helped promote the Welsh cause at any opportunity.