We are thrilled that baritones John Ieuan Jones and Steffan Lloyd Owen will be joining us. Check back to see more musical guests as our concert line-up grows. 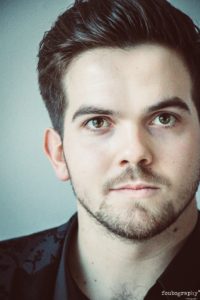 Originally from Rhos-on-Sea, North Wales, John Ieuan Jones is a baritone who recently graduated from the Royal Northern College of Music with a first class honours degree. He has returned to the college for a further two years of study to complete his masters, generously supported by numerous scholarships including the Andrew Lloyd Webber Foundation, Sybil Tutton Award from Help Musicians UK and the Darpers’ Company as their De Turckheim Scholar. He was originally trained by Mezzo-Soprano Sian Wyn Gibson and composer Brian Hughes before progressing to the college where he is now under the tutelage of internationally acclaimed bass, Matthew Best.

During his undergraduate degree, John Ieuan was fortunate to spend a lot of time on the Opera Theatre stage, being in the chorus for The Merry Widow by Lehar, part of the small ensemble for Cosi Fan Tutte by Mozart, played the role of Harry Easter in Weill’s Street Scene and Lord Ellington in La Vie Parisienne by Offenbach. As a result of his work in Cosi Fan Tutte, John Ieuan was invited to cover the roles of Antonio and Bartolo at Longborough Festival Opera’s production of Le Nozze di Figaro in 2016, directed by Thomas Guthrie. In 2017 he played Count Almaviva in Le Nozze di Figaro by Mozart as part of the college’s Opera Scenes. Now in his first year of masters, this December John Ieuan will be playing the role of Pandolfe (Cinderella’s father) in RNCM’s production of Cendrillon by Massenet, conducted by Martine André and directed by Olivia Fuchs. In early 2018, he recorded with Victorian Opera Northwest in a recording of comic opera Dorothy with conductor Richard Bonynge.

As well as his passion for Opera, John Ieuan Jones is very keen on his Musical Theatre, alongside his success in national and international competitions, John Ieuan has played the title role in Joseph and the Amazing Technicoloured Dreamcoat, Charles Clarke in Titanic: The Musical and recently played Leon Czolgosz in Sondheim’s Assassins at a sell out run at the Edinburgh Fringe Fesitval.

John Ieuan is an experienced concert singer, with a wide variety of repertoire ranging from operatic arias, Welsh songs, Lieder, songs from the shows and ballads, performing in concerts throughout Wales, the UK and further afield. Some highlights include performing in Proms in the Park Wales in 2016, the Drapers’ Company Annual Election Dinner, Conwy Business Awards, soloist with numerous choral societies and travelling to Florence to perform in an Opera Gala at the St Regis Hotel.